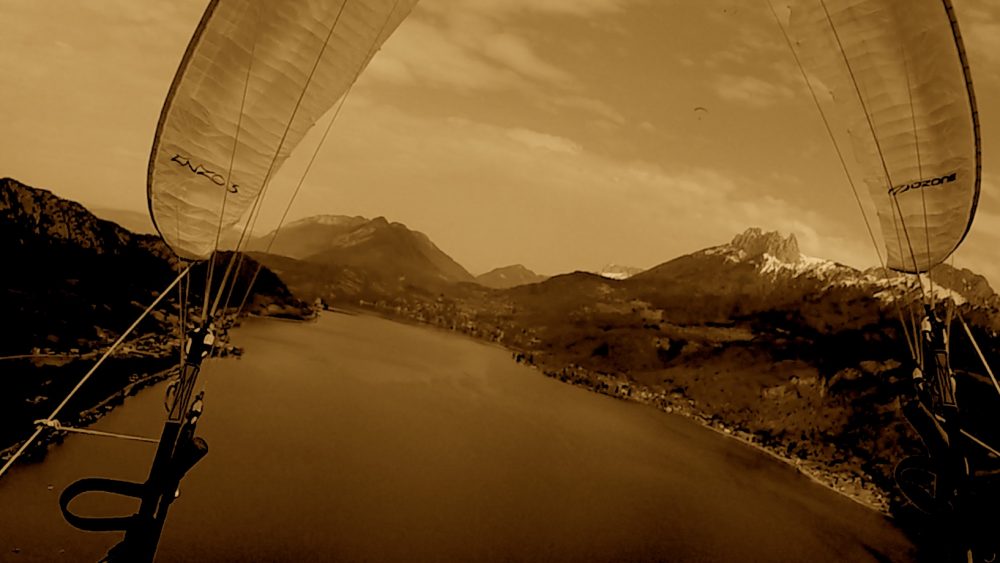 “The spring scent has finally begun drifting on the Forclaz Annecy lake take off point. We now started the SIV training of the French team 2018. Let me explain what is the SIV (Simulation Incident Vol in French)  training to those who are not very familiar with paragliding.

Because the paraglider wing is composed of thin lines tied to a fabric that has no solid structure, the glider sometimes collapses when itmeets air turbulences. It results in crush, or so called (neck-tie) that the glider fabric will get caught in the line. If you leave the glider crushed as it is, the glider turns to the crushed side and it goes out of control. We train you to recover such situation on the lake.

In the paragliding equipment, there is a reserve parachute for when the glider is in an uncontrollable state. However even with a rescue parachute, we can avoid a hard landing impact if we fall on the water. The pilot can practice in the perfect security condition under the guidance of the instructor ‘s radio communication and the rescue boat waiting on the lake. You will be wearing a life jacket that automatically inflates when it comes in contact with water.

With my suggestion in 2014, the French paragliding team has started their mandatory SIV training, and the results show that the team pilot’s glider control technique has steadily risen over the past 3 years. The Swiss pilot of team who incorporates the SIV team training before the French team also has a remarkable growth compared with the first year of training introduction.

When the glider control skill goes up, pilot’s stress while flying is surely reduced, enabling them to fly safely in strong and rough conditions. Another words, you will be able to enlarge conditions that you can fly. This spring, the largest participants gathered since this training began, especially young pilots who show their great motivations.

And this weekend Slovenia team pilot will join Airlinks Academy for SIV training! When all the pilot from world wide goes up, the future competitions will be even more interesting!”