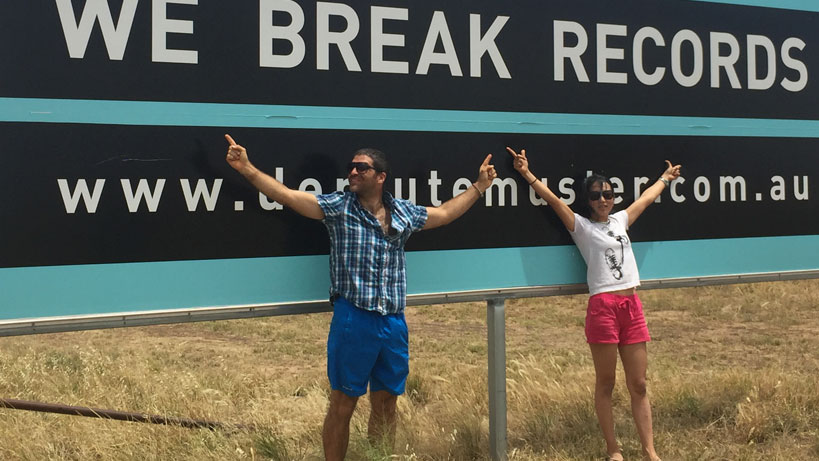 During the all comp season, Charles was focus on the last big flight done in december 2014 by Garth Gamac our local Ozone distributor in Australia. Following his great flight at the edge of the 400 km mark, Charles had a look and pushed Seiko to go there.

A new place, a new take off style, let’s rock it! Garth managed to set all the logistic to make this australian dream possible with the support of the local pilot. Winch were ready to bring them up high in the flatland and retrieval performed to bring them back home then!

The main daily difficulty for our team mate was to reach each other in the sky as towing can give different high and timing release. Almost everyday they succeed this challenge in the few kilometer around to go for team flight for hours! Despite the blue sky, the narrow thermal, and the 1500m average base on a day, they managed to pass the 300 km mark (a first time for Charles!), the 377 km fixed goal they set for Seiko and finally at the end of the day the woman free distance record with a 406 km flight, the 400 km in Australia! Almost 11 hours flight again the clock as they were going from west to east.

Following this successful days, some ride in the kangourous fields, low save and chill out in Deniliquin, the famous day came: weak, tied, tricky start… A start for hours as Charles said, as he was only 100km away after 4 hours in the air scratching the ground in the middle of hughe field, he was chasing the core on the lie of each watertank, each shaddow, each thermal trigger.

Then conditions switch on a race mode, high climb, back wing and full speed! What a change! « I never pushed so much full speed while XC flying » focus on the 500km mark and the sun slowly going down… A last glide, some side wind to be able to follow reachable landing area and the flight end up in a 40 km/h wind, on a small road with big eucalyptus on the side.

Time to pack and start to walk in direction of the main road… 60 km further! Hopefully he met a nice farmer, have a drink and reached retrieval team coached by Pierre.

The team was ready to start from Deniliquin the next day!